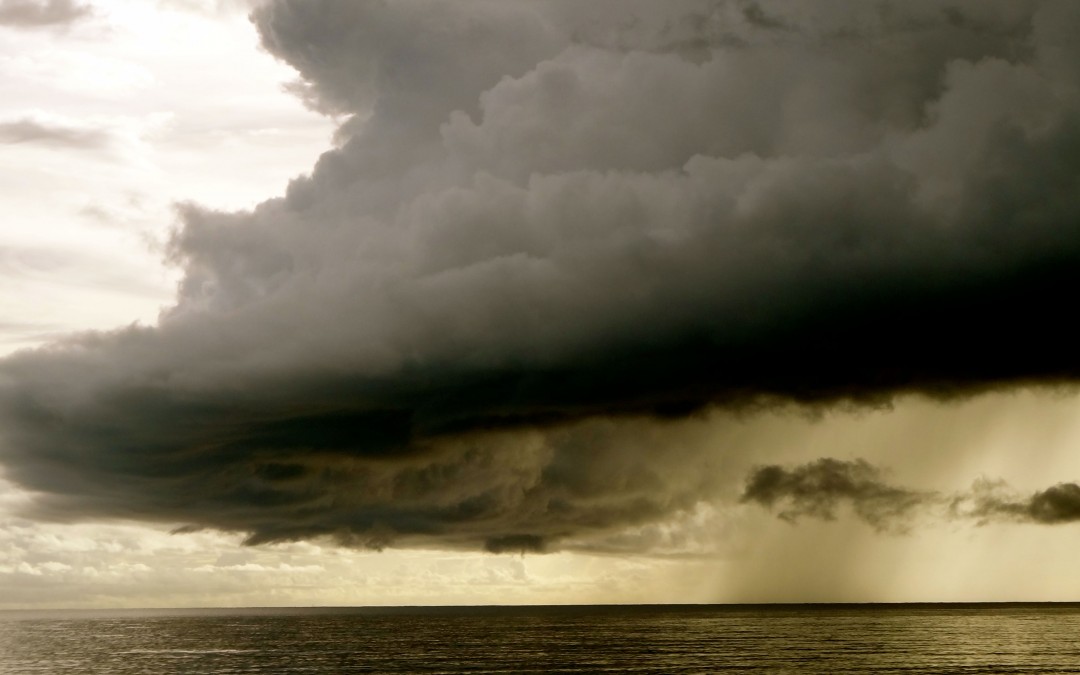 In the light of Hurricane Matthew I want to offer some thoughts on: Leadership in a Storm

The seas of human life, so lashed as they are by storms of crisis and controversy, are where real leaders do their duty. Happily-ever-aftering only happens in the movies. Real life, and therefore real leadership, is actually one storm after another punctuated by brief and very welcome periods of calm. Once a leader finds the maturity and experience to face that honestly, the stormy seasons become immensely less stressful.

Until then, every storm feels like the “big one,” the once in a lifetime, storm of the century that just has to be lived over and after which “normality” will return. Inexperienced leaders spend useless energy trying to figure out why this particular storm has come. The bottom line is storms happen. Winds blow, and they toss good boats and bad the same.

Some storms are self-inflicted and they are the hardest to endure. I’ve caused some of those storms myself. Others are just part of living in a fallen universe. Things break, fall apart, go south and prove more fragile than we imagined. That is life, real life, and real life is not always smooth sailing. The night before the annual July Fourth city-wide celebration in your auditorium, the air conditioning goes out. Does God hate you? Of course not. Perhaps He just doesn’t like patriotic music and indoor fireworks. Again, of course not. Air conditioners just sometimes break. It’s that simple. It always seems that they break at the worst of times. On the other hand, when would it be convenient?

Here are some thoughts on leadership in a storm.

I. Listen to the Weatherman

You cannot stop storms from hitting but you don’t have to set out to sea with one on the horizon. When storm warnings have been posted, stay put. It’s often as simple as that. Controlling hurricanes is not a viable strategy, but listening to wise counsel is. In Acts, if the centurion had only heeded St. Paul’s warning in the first place, their ship would never have been caught out in the middle of the sea when the storm hit.

Surround yourself with wise counsellors, experienced prognosticators who can read the signs and pay attention to them. Great leaders know better than to instantly cancel plans the moment some hysterical Chicken Little starts screaming. They also know that when the most level-headed, mature among the crew are advising caution, it might just behoove the captain to snuggle down in some nice, safe port and wait it out.

Sometimes avoiding a storm is not possible. When a storm catches your ship at sea, forget speed. The destination can wait. When survival is the goal, pushing ahead with your travel plans can prove self-destructive. Great leaders know that when a storm threatens to rip away the main mast, more sail is hardly the order of the day. Visionary, faith-filled leaders despise whatever delays their exciting building plans, their huge staff transitions or their expansions or their whatever. Many great leaders are born with a need for speed. On the other hand, it is easier to endure the slight pinch of a momentary delay than to plunge ahead and experience the far greater pain of watching dreams wrecked by a storm. There is a time to sail on undeterred, and a time to trim your sails and just ride it out.

When a storm gets bad enough, some things must be jettisoned. The higher the waves, the more must be tossed overboard. Every ship is carrying extra cargo. In calm seas that is ok. The more you carry, the deeper you ride in the water. The problem is that all that extra stuff uses up the margins of life and leadership. Ask yourself this question. How deeply in the water is my leader-ship and, for that matter, my life-ship riding? What is optional? What obligations, responsibilities and  burdens am I able to handle right now, in these calm seas, which in a serious storm, I would not want weighing down my vessel? Do I have the maturity and good sense to lighten my load should a storm suddenly hit? Great leaders know their inventory. They know what is necessary and what is optional. They take stock ahead of time and they know which extras would go overboard in a typhoon.

IV. After the Storm Is Over:

The damage done can appear devastating. After Hurricane Charley, which nearly destroyed our house, Alison and I struggled to believe it will ever be right again. In fact, it was righter than right. In the long run, Hurricane Charley actually improved my house; new roof, new fencing, new landscape, new lots of things. When it was all finished, it looked better than ever.

After the storm, wait. Be patient. First, do what can be done easily. It will give you a sense of momentum. Take on the harder stuff in bits and pieces.

Finally, keep your eyes on the prize. Don’t fix your gaze on the damage because it can overwhelm you. Envision how much better it will all be. Finally, have faith in God.

Hurricanes come and go, but in every storm that rages, cling with hope to the everlasting Rock of Ages.